Check out how Armie Hammer and Johnny Depp’s costumes stand up against actual Native Americans.

Does being Johnny Depp get any better? Yes, yes it does this man has everything, looks, money, a fantastic resume of films and the choice to do whatever movie he wants. So who would have thought his next picture was going to be the ‘Lone Ranger’? Now I have to ask, he’s probably one of the coolest actors around right? Well he just got cooler! Johnny Depp and company just got to meet the Navajo Nation President Ben Shelly who presented them with Pendleton blankets as a sign of good-will (I know what your thinking – payback is a bitch). Anyway this is what the Navajo President said about Depp:
“Depp was very gracious and respectful, along with very patient with picture taking,” President Shelly told ET, adding, “It was a great honor and privilege to meet Johnny Depp and filmmaker Jerry Bruckheimer. We are honored the movie The Lone Ranger is being filmed here on the Navajo Nation. The Navajo Nation has beautiful landscape and we are glad it is being shared through filmmaking.”

The ‘Lone Ranger’ is still shooting and is to be released on May 31, 2013. That’s pretty far away so for now here are some photos to keep you happy or sad, whatever you chose. 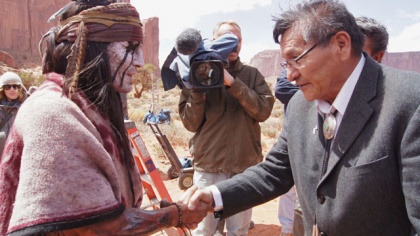 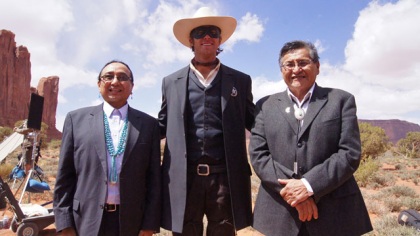 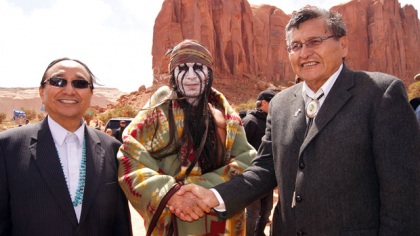