Check out Jon Bernthal from a Walking Dead Panel last weekend discussing how he proposed that they end Shane’s life in the series.

I think enough time has passed that it isn’t too spoilery for me to say that Shane dies at the end of season 2 of The Walking Dead. It is especially not that spoilery because it happens in the comic book too. Last weekend, Jon Bernthal was at the Phoenix Comiccon where he told the crowd that he actually had proposed a slightly different death scene for his character. After listening to him explain it, I kinda wish they went with his idea. Check it out and let us know which version you prefer.

Here is what actually happened on The Walking Dead… but in Lego form. 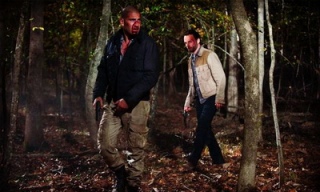