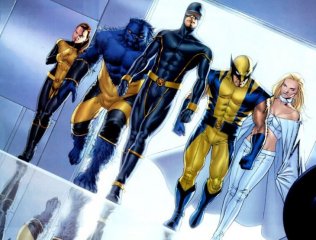 Joss Whedon’s and John Cassaday’s popular Astonishing X-Men series is getting animated by Marvel Knights Animation and Shout! Factory. The animation will hit Blu-ray November 13, 2012 and contain all four story arcs from the award winning title on to a 2-discs set. The run time is expected to be over five hours long and the Blu-ray will feature new cover art by Cassady.

The Astonishing X-Men Blu-Ray Collection will retail for SRP $34.99.

Here’s the line-up of the titles included:

ASTONISHING X-MEN: GIFTED
Can the X-Men protect the world’s mutants against a powerful new alien menace and the “cure” that threatens to rid them of their unique abilities forever? This DVD features the first story arc of the ASTONISHING X-MEN 3-part series. Extensive bonus content includes: a conversation with Joe Quesada and Neal Adams, ASTONISHING X-MEN “Rise Up” music video, ASTONISHING X-MEN – GIFTED trailer, visual history of the characters, behind-the-scenes, Marvel Super Heroes™: What The — ?, artists gallery – John Cassaday, and additional trailers.

ASTONISHING X-MEN: DANGEROUS
In the second installment of the Astonishing X-Men arc, the tragic death of a student at the Xavier Institute reveals that a powerful enemy is working from inside the mansion to destroy the X-Men. It’s an enemy who knows all their weaknesses and can predict their every move. This new foe doesn’t want wealth, power or world domination – it only wants them dead. As the X-Men fight for their lives, they learn they’ve been deceived by one of their own. Even if they survive, the team will never be the same.

ASTONISHING X-MEN: TORN
This third installment of the Astonishing X-Men story arc brings more action and adventure as Emma Frost’s erratic behavior has the X-Men spinning in a nonstop downward spiral. Will an unlikely union be the final straw? After secretly lying in wait for months, the new Hellfire Club makes its move!

ASTONISHING X-MEN: UNSTOPPABLE
Strap yourselves in, folks! The final arc on Astonishing X-Men! After the shocking and brain-smashing events of recent issues, the X-Men are off to protect the Earth from its destruction at the hands of the Breakworld. And when it’s all over, nothing will ever be the same! No, really, we mean it! Whedon and Cassaday prove they are more than Astonishing: They are unstoppable!