“Olivia Thirlby (Juno) is perfect as Anderson, the young psi judge. She gives the character a touching vulnerability. Karl Urban will not remove his helmet and will not kiss his costar.” 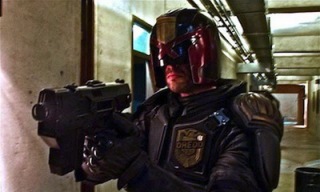 John Wagner, the man who first created Judge Dredd for the pages of “2000 AD” recently did an interview where he reflected on the first Dredd movie and gave his opinion on the new reboot starring Karl Urban.

He was surprisingly kind in regards to the first movie. Most fans of the character had a lot of major problems with it, but Wagner has a very interesting take on how it all came out.

“They told the wrong story — it didn’t have that much to do with Dredd the character as we know him. I don’t think Stallone was a bad Dredd, though it would have been better and lent him more cred if he hadn’t revealed his face. He was just Dredd in the wrong story. I envy their budget, though. Some of the CGI was very good, and the re-creations of the Angel Gang and the robot. The robot actually came from a [Judge Dredd editor] Pat Mills story and didn’t belong in Dredd, but it looked good. If the plot had revolved around characters like them the film would have been more successful.”

Now, here’s his take on the new version starring Karl Urban.
“The plot is about Dredd and his world. It’s impossible to cover every aspect of the character and his city – perhaps that was one of the failings of the first film; they tried to do too much and ended up with not a lot. Dredd homes in on the essential job of judging – instant justice in a violent future city. I like the actors, they’re well cast and they handled their parts well. Olivia Thirlby (Juno) is perfect as Anderson, the young psi judge. She gives the character a touching vulnerability. Karl Urban will not remove his helmet and will not kiss his costar.

Judge Dredd is set for a September 21, 2012 release. Here’s the official synopsis:
DREDD takes us to the wild streets of Mega City One, the lone oasis of quasi-civilization on Cursed Earth. Judge Dredd (Karl Urban) is the most feared of elite Street Judges, with the power to enforce the law, sentence offenders and execute them on the spot – if necessary. The endlessly inventive mind of writer Alex Garland and the frenetic vision of director Peter Travis bring DREDD to life as a futuristic neo-noir action film that returns the celebrated character to the dark, visceral incarnation from John Wagner and Carlos Ezquerra’s revered comic strip.