If anything, the image that was released makes me appreciate how few F#*@s Snyder gives about the perception his comic films are too dark.

It seems like every time Warner Bros and DC release a film these days, people are left hoping that they’ll do a better job on the next one. Realistically, if they can’t make that happen on Justice League, then they should probably just pack it in and start over.

Today, Zack Snyder has unveiled the first image of one of the film’s characters, Mera, Queen of Atlantis, Wife of Aquaman, and general badass in her own right. Along with being able to breathe water, she’s also got super strength and the ability to create hard objects out of water.

In the movie, she’ll be played by Amber Heard, alongside Jason Mamoa as Aquaman, Henry Cavill as Superman, Ben Affleck as Batman, Ezra Miller as The Flash, Gal Gadot as Wonder Woman, and Ray Fisher as Cyborg.

If anything, the image that was released makes me appreciate how few F#*@s Snyder gives about the perception his comic films are too dark. Nothing doubles down better than muting all the background colors in the picture. Personally, the outfit looks a little to restrictive for life underwater, but what do I know? I’m just a lame ass land dwelling mortal. 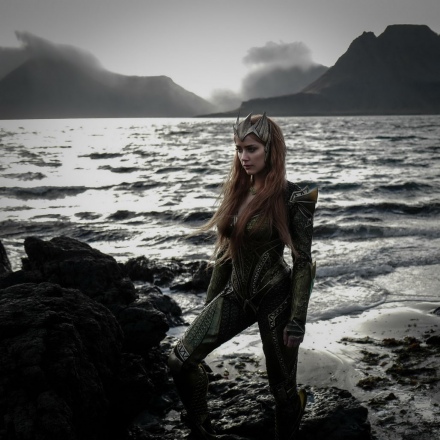