Another minute of her hitting the roof of the Coffin and I was going to start praying for a cave in. 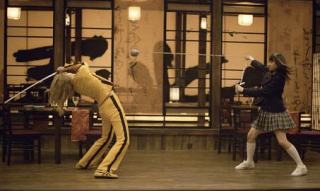 According to the Tarrantino Archives, the mad film director had something to say about more Kill Bill while on the set of Inglourious Basterds.

Kill Bill Volume 3 would be the revenge story of two killers whose arms and eyes were hacked by Uma Thurman in the first volume. This reveals that this could be Sophie Fatale and Elle Driver. I could also see surviving members of Crazy 88s teaming up them. The Japanese series Lone Wolf & Cub was a large influence on both films. Shogun Assassin, one of the films was watched during volume 2. I could see Tarantino basing the third film on the series. Having the pair work together while fighting off deadly assassins.

Kill Bill Volume 4 would then focus on the battle between Bibi Kiddo and Nikia Green, an idea which Tarantino had been very vocal about during the film’s theatrical release. It’s also rumored that daughters of Elle Driver and Gogo Yubari could also be involved. Of course the timeline would be ten or so years from the first two volumes.

Rumo is that this might actually be his next project. What do you think? Does the world need more Kill Bill?