“The adaptation is described as an “illustrated film” mixing elements of anime, radio drama, video games and comics.” 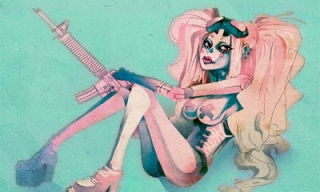 Godkiller is coming to the big screen and it its got a great quartet of voices backing it up according to the Hollywood Reporter. Lance Henriksen, Bill Moseley, Justin Pierre and Davey Havok are all joining the case of the film which is being produced by Halo-8 Entertainment.

Based on a comic book Pizzolo created with illustrator Anna Muckcracker, the adaptation is described as an “illustrated film” mixing elements of anime, radio drama, video games and comics.

Fans attending Wondercon will have a chance to see a preview this coming weekend.

Set in the future after an economic collapse, a nuclear holy war and an alien invasion, “Godkiller” follows orphan Tommy as he searches for a new heart for his ill sister, Lucy.

“When we decided to make an anime adaptation of the comic book, I couldn’t see how a traditional animated approach would do justice to Anna’s incredibly lush and detailed illustrations,” Pizzolo said. “It made perfect sense to adapt the medium to suit her art, rather than vice versa.”