Definite spoiler alert. It’s in the title. If you don’t want to see it, don’t click it.

A promo poster for Star Wars: Episode IX has leaked online and if it is real, it offers some major details and teases for the upcoming film. It should definitely be taken with a grain of salt, as it is not an official release and you never know who is just pushing stuff out to have some fun. Let’s go through all the big reveals here, starting with the one that makes me think it could be fake. 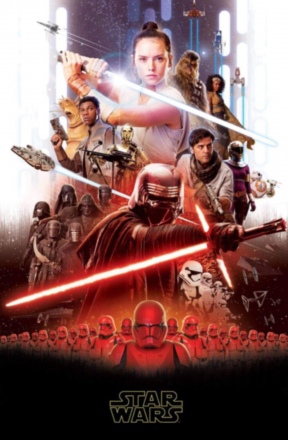 – What the hell is C3P0 doing with Chewbacca’s Bandolier and Bowcaster? It not only makes no sense for what we’ve known about the character for the last 40+ years but does this mean Chewie is gonna die?!?

– Where the hell is R2?!? There are three droids on the poster, C3P0, BB-8, and the rumored little sidekick that he’ll have in the film. What I’m not seeing here is R2-D2.

– Damn, check out those Knights of Ren. This is our first good look at Kylo’s good-squad and they are looking seriously badass.

– Where’s Rose Tico? At the end of The Last Jedi, Kelly Marie Tran’s character was set up to be a major part of the story. It’s interesting that she doesn’t rate the promo art.

– Does Lando have a daughter? I’m not asking that because the character standing next to Chewie is a POC, but because she’s wearing a cape.

– Who is the woman in the helmet standing next to Poe Dameron? Is this the super-secretive character that is being played by longtime JJ Abrams collaborator Kerrie Russell?

– Are we really getting new, red Stormtroopers or they just being colored by the light of Kylo Ren’s blade?

– How big of a space battle are we in for here? This poster looks like an encyclopedia of Star Wars ships. On the Resistance side, we have multiple types of X-Wings, as well as Y-Wings and A-Wings. Not to mention the Millennium Falcon. Meanwhile, it looks like you can see at least three different types of Tie-Fighters as well as several warships on the First Order side of things.

We won’t know if any of this is accurate until Star Wars Celebration hits Chicago next month. I the meantime, this gives us a lot to speculate on!