The teenage princess is sent to Lothal—the base planet for the series’ main characters, a group of rebel fighters—on a secret mission to bring ships for the rebel fleet.

Along with just being a great series, Star Wars Rebels has provided us with some truly great guest spots featuring characters from the original trilogy as well as the Clone Wars. Now the show’s executive producer, Dave Filoni, is teasing an upcoming appearance by none other than a young Princess Leia Organa.

The episode is set to air on January 20 and will kick off the second half of Rebel’s season 2.

The teenage princess is sent to Lothal—the base planet for the series’ main characters, a group of rebel fighters—on a secret mission to bring ships for the rebel fleet. Unfortunately an Imperial lockdown throws that plan into chaos.

On the episode, Filloni said:
“We thought we had an opportunity to show her learning to be a leader, experimenting with the personality that becomes the stronger more resolute character you see in A New Hope. One of the complex challenges of depicting Leia in Rebels is that we have to remind the audience that at this point she is part of the Empire. She doesn’t believe in the Empire, but she is acting the part, almost a double agent.”

Carrie Fisher will not be voicing the character in the show. That job goes to Julie Dolan, who also played Leia in the video game Star Wars: Uprising. 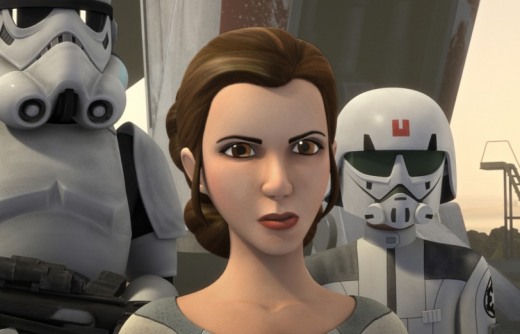