I was so humiliated I thought, I’ve got to try to do this on my own. 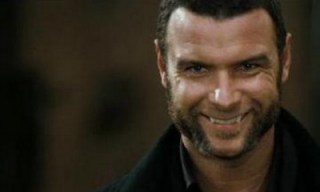 With most Superhero movies there’s usually some ridiculous costume or prosthesis that they have to wear. In the upcoming X-Men Origins: Wolverine movie, Liev Schreiber was almost stuffed into a muscle suit for his role as Sabretooth. He’s not the only one either. Hugh Jackman had to strap on those claws, and Kevin Durand wore a Fat Suit for his Role of the Blob.

Just over a year ago, Schreiber was “smoking a pack and a half and drinking my nuts off” on a Broadway stage eight times a week in a blistering, virtuoso performance in Eric Bogosian’s Talk Radio. Then he was cast as Sabretooth, the supervillain in this summer’s X-Men Origins: Wolverine, opposite his friend Hugh Jackman. (”The very large and very muscular Hugh Jackman,” he says.)

“I started to read blogs in the comic world with things like ‘That’s the dumpiest, most out-of-shape Sabretooth I’ve ever seen in my life!’” he says. “They gave me a muscle suit at the beginning. I was so humiliated I thought, I’ve got to try to do this on my own.” Jackman helped him train, putting him on a diet so poultry-intensive that Schreiber jokes they were becoming “the Hitler and Mussolini of the chicken world. But I felt like I owed it to the genre to be big.”