Lionsgate has made a deal with MGM to distribute “The Cabin in the Woods.”

Deadline is reporting that Lionsgate has made a deal with MGM to distribute “The Cabin in the Woods,” a horror film that’s unexpectedly been on the shelf for several years despite its “terrific creative pedigree and a high degree of fanboy wanna-see.”

Directed by Drew Goddard (Cloverfield) and co-written by the Joss Whedon (The Avengers), the film stars Chris Hemsworth and was originally set to be released by MGM back in October of 2009. The delay has nothing to do with the quality of the film, but rather the situation with MGM at the time and the fact that they wanted to convert it to 3D.

It’s unclear when Lionsgate will release “Cabin,” but an October release date is as good as any for a horror film. Especially now since “Thor” will establish Hemsworth’s star value making the film an easier sell.

Hemsworth had made the film prior to staring as the title character in Marvel’s Thor. 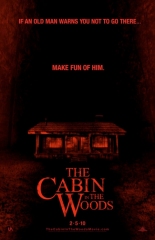