Namco’s popular “Tekken,” video game franchise is being adapted into a live-action flick and we have our first look at its official international poster.

Namco’s popular “Tekken,” video game franchise is being adapted into a live-action flick and we have our first look at its official international poster. “Tekken” will star Luke Goss stars as Steve Fox, Jon Foo as Jin Kazama, and Dwight H. Little (Anacondas: The Hunt for the Blood Orchid) is set to direct.

The “Tekken” premise is set in the year 2039 and “the film promises non-stop high flying action as the greatest fighters from around the world come to compete in the last and greatest sporting event of all time, the Iron Fist Tournament.”

If you’re a Tekken fan and hoping to catch this anytime soon, however, you might be disappointed to hear that Warner Bros is currently only distributing it in Japan for now. This may actually be a blessing in disguise, especially if it follows the footsteps of movies like “Dragon Ball” and “Street Fighter: The Legend of Chun Li,” which became notoriously know for their ability to totally suck.

“Tekken” was penned by ALan B. McElroy (Spawn, Wrong Turn, The Marine) with fights choreographed by Cyril Raffaelli (District 13, The Incredible Hulk). 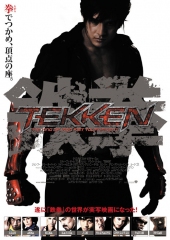