Avatar Is Beyond FTW, Movie Review

If Avatar’s any inclination of what this man’s capable of, the world is simply not enough. I can’t think of a single reason why Avatar would ever be toppled from the pedestal I’ve put it on. 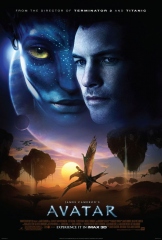 Remember how Ah-Nold foretold the future when he robotically stated “I’ll be back” in both Terminator 1 and 2? Not bad for a fresh-from-the-future robot predicting the success of James Cameron. Or how about that other film when Jack triumphantly screams into the wind “I’M KING OF THE WORLD!!!’ while aboard the ultimately Epic Fail of all cruise liners? While the Titanic sank (the ship, not the movie), James Cameron went the complete opposite direction because, if Avatar’s any inclination of what this man’s capable of, the world is simply not enough.

I didn’t quite know what to make of this movie when I was covering 2009’s San Diego Comic Con. I liked the gigantic Mecha-looking suit (I now know they’re called AMP suits – Amplified Mobility Platform suit) but I wasn’t quite sure how that fit in with the gorgeous diorama depicting what looked like a forest with strange looking creatures. I basically went into this movie blind because the only thing I knew was “there’s a giant Mecha suit that somebody’s gonna have to operate” and “there’s a planet with blue human looking creatures and dinosaurs!!”

On the off chance you have no idea what this story’s about, let me fill you in so that you don’t have to buy a clue. I should also warn you right now of spoilers in this post.

In the future, Jake, a paraplegic war veteran, is brought to another planet, Pandora, which is inhabited by the Na’vi, a humanoid race with their own language and culture. Those from Earth find themselves at odds with each other and the local culture. Written by Giorgio_C

When his brother is killed in battle, paraplegic Marine Jake Sully decides to take his place in a mission on the distant world of Pandora. There he learns of greedy corporate figurehead Parker Selfridge’s intentions of driving off the native humanoid “Na’vi” in order to mine for the precious material scattered throughout their rich woodland. In exchange for the spinal surgery that will fix his legs, Jake gathers intel for the cooperating military unit spearheaded by gung-ho Colonel Quaritch, while simultaneously attempting to infiltrate the Na’vi people with the use of an “avatar” identity. While Jake begins to bond with the native tribe and quickly falls in love with the beautiful alien Neytiri, the restless Colonel moves forward with his ruthless extermination tactics, forcing the soldier to take a stand – and fight back in an epic battle for the fate of Pandora. Written by The Massie Twins

In terms of storyline, it seems to me like James Cameron took a handful of his most popular movies, added a few outside elements, hit “Blockbuster” on his food processor and TA DA!!! Avatar is delivered piping hot to the world 10 years later.

From The Files Of James Cameron 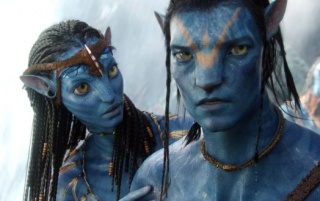 There was the hint of forbidden love between Jake Sully and Neytiri (can anyone say Jack and Rose from “Titanic”?). Rose and Jack had to battle the line of upper class versus working stiffs. Jake and Neytiri had issues regarding compatibilty of the most base kind – Human Genome Project vs. Alien DNA. I’ve never seen hot monkey alien love before but it was very PG…and kinda hot so I still wanted to cover my mom’s eyes over her 3D glasses. Combining human DNA with Na’vi genes resulted in Avatars but they still weren’t completely right. Apparently our human smell is…unpleasant.

Luckily, their love managed to flourish and blossom after a few hiccups along the way. And does no one out there also think the Na’vi remind you of what the Smurfs would look like if they were super human sized supermodels? I had a little crush on Jake Sully as a Na’vi when he was rocking the pseudo-mohawk with the beads and feathers all woven in. I can also listen to him talk all day. Neytiri is also hot as hell with an equally mesmerizing voice to match. I never would’ve guessed she was the same chick from Pirates of the Carribean.

The alien attractiveness of James Cameron’s vividly imagined race plus the insane success of this movie leads me to conclude there’s going to be another generation secretly in love with blue skinned creatures.

All you boys out there who grew up singing the Smurf song (“La la lalalala laaaaa la la la laaa”), don’t tell me you weren’t even just a little bit in love with Smurfette when you growing up.

Ladies, do I need to remind you about Hefty Smurf? Hmmm?

The bad ass weaponry / military aircrafts / epic battle scenes reminded me of a mecha-inspired blend of Terminator, Predator, The Abyss and Rambo with a bit of Final Fantasy thrown in. It makes sense when you factor in James’s love of Japanese anime.

If you read my blog, I hinted in my Avatar entry about how this movie reminds me of Chrono Trigger and how I found a correlation between this movie and “Twilight.”

Allow me to explain.

There’s a stunning set of floating mountains in Avatar known as the Hallelujah Mountains. They’re gorgeous, they’re spectacular, they insist on stealing your breath away as you stare at them…and that’s when I realized I had seen something very very similar. 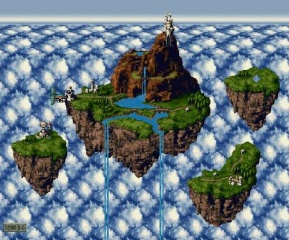 After searching frantically through my memory, it finally dawned on me. I’d seen similar mountains when playing Chrono Trigger. It was like seeing The Kingdom Of Zeal brought to the big screen but with much better graphics. Ayla from Chrono Trigger rides winged dinosaur things. The Na’vi ride Banshees, winged creatures that sort of look like dinosaurs. I absolutely loved it!! Chrono Trigger is, hands down, my favorite RPG to date and not just because it was my first RPG.

As for the reference to “Twilight”, I’m talking about Stephenie Meyer’s other book “The Host.” Sorry, no actual blood suckers here although the Na’vi have a set of wickedly pointy canines. But in case you haven’t heard of “The Host”, let me give you a little taste and tell me you don’t find similarities

The story is about an alien race called “Souls.” Souls are creatures that rely upon host bodies to survive. After “insertion” into a human body, they erase the human occupant and establish a claim over the body and mind.

In Avatar, it’s a little bit backwards. Humans are the aliens on Pandora and we’ve figured out a way to merge Na’vi DNA with our own to produce Avatars. We then upload ourselves (omg, just like in MATRIX!!) into the Avatars and do what we have to do for the day.

Another similarity? Jake and The Wanderer from “The Host” go native (a term I’m borrowing from Stephenie’s book), meaning they defect to the other side of their respective species. Wow, talk about multiple spoilers…sorry!

As an added bonus, the general storyline smells a lot like “Fern Gully.” Anybody else remember that movie?

1. There’s a lot about the Na’vi’s customs that reminded me of Qi and Qi Gong especially the part where they tried to heal Grace. That particular scene reminded me of Qi therapy. I should say here that I’m not a practioner of Qi Gong or Qi therapy. I’m only going off of all the kung-fu movies I grew up watching and wikipedia.

2. The cast ROCKED!! There’s Ripley…I mean, Sigourney Weaver, Giovani Ribisi (absolutely LOVED HIM as Oswald in X-Files. I was so sad when he was fried at the end of that episode) and Michelle Rodriguez. I love it when Michelle Rodriguez plays these ass kicking females. She made me love her as an actress all over again like the first time I saw her in “The Fast And The Furious.”

But Sam Worthington…it was so good to see him again after Terminator Salvation. He completely stole my attention away from Christian Bale in that movie and I love Christian Bale. Yeah, he more or less played the same type of character but I don’t care. When he was Jake Sully of the Omaticaya tribe, I fell in love. He totally nailed it. Zoe Saldana’s voice is what made Neytiri come alive for me. Molten honey…that’s what her voice reminded me of. Who wouldn’t fall in love with that? 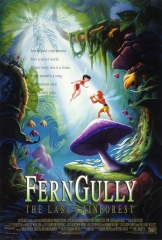 4. I don’t remember seeing the Na’vi eat. The only time I saw them eat was when Jake caught the alien pomengrate looking thing Grace tossed at him and took that one juicy bite. That was it. Did no one else catch that?

5. Despite the unoriginal storyline (again, it’s like he used “Fern Gully” as the skeleton and fleshed it out with “The Host”, pieces from his own greatest movie hits collection and elements of video games), I am going to say the movie is beyond FTW.

I’ve never seen a 3D movie and I can’t remember if I’ve ever seen an IMAX movie…but James Cameron has popped my IMAX 3D cherry…and, man, was it good… If my eyeballs could have orgasms (my friend, Patti, calls it “eyegasms”), I’m sure I would’ve managed to achieve that. The visual buffet he laid out was beyond sensual. Coupled with the 3D effects, it was almost more than my poor eyes could handle.

As of this moment, I can’t think of a single reason why Avatar would ever be toppled from the pedestal I’ve put it on. Then again, I have a thing for firsts. Chrono Trigger was the first RPG I ever played and I’ve played my fair share of RPGs but none other has ever come close to it in my heart.

This movie was almost 3 hours long. It didn’t seem like it at all and I was actually sad when it ended. I wanted to live on Pandora. I yearned to run, fly and ride like the Na’vi. James Cameron not only brought this imaginary world to life for me but I wanted to be a part of it. I have no idea what his next project is but I do know that he’s set the bar insanely high after Avatar.

2 thoughts on “Avatar Is Beyond FTW, Movie Review”