Designed by the Korean designer CoolRain, Kobe is one of many in MINDstyle’s new trading figure style vinyl toy NBA line. 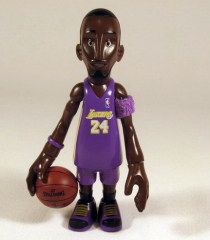 It has been a while since we reviewed a vinyl figure from MINDstyle Toys, but we recently got in the Wondercon Exclusive Kobe Bryant Vinyl Figure from MINDstyle’s NBA Collector’s Series 1 and was cool enough that we had to share him with you all. In case you weren’t at Wondercon, but still want the figure, you can pick him up exclusively at Shopafx.com. This isn’t an open addition figure. He’s limited to 1500 pieces world wide.

This Kobe figure is a great first taste of the new NBA line from MINDstyle. The figures, which were designed by the Korean designer CoolRain (man, I bet that name kills when you use it in a bar…), are five inches tall and pack a lot more into them than the typical trading figure style vinyl toy.

Sculpt- When you are talking about sculpt and vinyl, you can’t really go into likeness too much. They actually did a good job of capturing Kobe’s essence… man, that sounds kinda dirty. What I mean is, you can tell it is supposed to be him. The sculpt has a really cool, stylized look to it. It borders on almost a graffiti-like feel. It is definitely the right angle to go for basketball figures.

For me, the sculpt and accessories actually blend together. The main accessories are the four extra hands that come with the figure. That means you get six hands in total. I want to include these under sculpt because they did a really nice job making all the hands different enough to be worth it. There’s the open handed palming the ball hand, the running hands and the OK hands.

Paint – The paint is simple but good. How complicated are you really expecting on a vinyl basketball figure? This isn’t like a McFarlane figure it is meant to be stylized. Anyways, they did a great job on getting the face painted just right along with the jersey and shoes. There was a little bit of paint wear from inside the packaging, but it was minor enough that you’d really have to go looking for it. 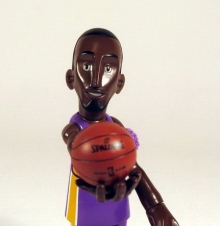 Articulation- Generally, I expect no articulation from a vinyl figure. That just isn’t the case here. On this figure, you can turn the feet. You can rotate the hands 360 degrees. you have nearly 180 degrees of movement with the arms and the head does a full 360 on a pivot. I think the pivot is really important because when you are able to have that little head tilt, it actually adds a lot of expression into the figure.

Extras- This figure has some nice treats that come with it. First, it comes with a little Spaulding basketball, to scale with the figure. If you look at the box art, you’ll see him holding the ball, but you can’t recreate that on your own. I did find a couple positions where Kobe can hold the ball. I really like having the ball at his side, but I’d be careful if you do that with yours. it looks like leaving it in that position could eventually bend the arm.

Speaking of arms.. There is a little something on each arm. They aren’t a big deal, but they are the little touches that show the effort MINDstyle is willing to put into projects. On one arm you have an actual sweatband made out of sweatband material. On the other is a little… and I mean tiny Livestrong silicon bracelet that actually has livestrong embossed in it in what must be .5 point type. There’s an enlarged version in the gallery.

I’ve seen a lot from MINDstyle over the years. From their work with small artists to the amazing things they’ve been able to accomplish with Disney and now the NBA. The Kobe Bryant figure is a great sign of things to come from the NBA collector’s series. If you are a basketball fan, this is the time to start on this line. You don’t want to be the guy who is stuck on Ebay trying to find this figure when series 3 comes down the pike.