Logo and Official Synopsis Revealed For The Justice League Movie

Along with the new logo and the synopsis, we are also getting our look at the newest incarnation of the Batmobile.

The logo and synopsis were just released for WB’s Justice League and it’s actually kind of funny how heavy the course correction is on tone here. It’s almost like they are saying: “We get it. The last movie was so dark and dour that we need to start convincing you now that we’ll do better.”

Fueled by his restored faith in humanity and inspired by Superman’s selfless act, Bruce Wayne enlists the help of his newfound ally, Diana Prince, to face an even greater enemy. Together, Batman and Wonder Woman work quickly to find and recruit a team of metahumans to stand against this newly awakened threat. But despite the formation of this unprecedented league of heroes—Batman, Wonder Woman, Aquaman, Cyborg and The Flash—it may already be too late to save the planet from an assault of catastrophic proportions.

I also find it really curious that they aren’t acknowledging the return of Superman in the film. Perhaps that will be the finale of the first movie? Either way, it’s not like the audience isn’t expecting it. They showed the ground moving over his grave in BvS…

Along with the new logo and the synopsis, we are also getting our look at the newest incarnation of the Batmobile. Personally, it looks like something Clooney’s Batman would drive around in, but I’m more of a fan of the classic Tim Burton car and the Animated Series Batmobile. 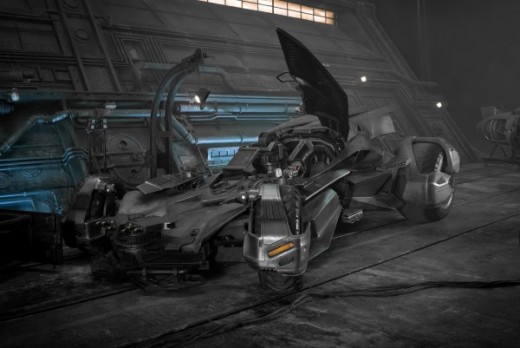