While dusting their nooks and crannies it seems that UK’s Huntley Film Archives have discovered a long lost cartoon from Walk Disney. 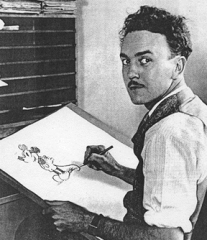 While dusting their nooks and crannies it seems that UK’s Huntley Film Archives have discovered a long lost cartoon from Walk Disney. This comes as no surprise to me because if you’ve ever been to Heathrow airport in the UK then you know the English are fans of losing your luggage. My assumption is that Walt flew to England with a 16mm double perf print of Hungry Hobos and they “lost” it. This flew him into one of his famous rages and he ended up destroying five buildings and a mini cooper. After that incident Walt was never to step foot in England again!

Now after all this time a cartoon previously believed to be lost to the ages has turned up and you can buy it too! It will be going for auction at Bonhams on December 14th. It’s estimated price range is $30,000 – $40,000, which, for a rich Disney super fan isn’t that bad considering you’d have the only copy in existence of an Oswald cartoon.

Here’s a word from Bonhams:

“Walt Disney Hungry Hobos, 1928, the only known copy of the film previously recorded as lost, featuring Oswald The Lucky Rabbit and Peg Leg Pete, comprising a 16mm double perforated celluloid acetate positive print, silent, probably dating from around its distribution date of late 20s/early 30s, total running time 5 minutes, 21 seconds and 2 frames at a running speed of 24 frames per second. The character of Oswald was created by Walt Disney and Ub Iwerks for a series of cartoons introduced in 1927.”

I know the above Heathrow incident is only speculation on my part but it comes from a solid source (my other personality Ignacio Montoya the 5th). Maybe we’ll never know how this classic cartoon was lost and turned up in some English film archive but I say it has a hell of a lot to do with World War I and the great cartoon robbery of 1983! Sadly my dear YBMW readers that’s a story for another time…

CP Lorusso is TV / Film / Web writer and editor working in Los Angeles. He’s never eaten the color purple, has a wig in the shape of a high five, and tries his best not to wear diapers most of the day. He can be reached at CPL[ a t ]YouBentMyWookie.com or on Twitter @CPLorusso.