Louis C.K. to Release First Film, TOMORROW NIGHT, on His Website for $5

Louis C.K. has won a bunch of awards for writing, directing, producing, and editing his critically acclaimed series, “Louie.” He’s also getting a lot of attention for his recent roles in Woody Allen’s Blue Jasmine and David O. Russell’s American Hustle. Now he’s getting attention for a film he made all the way back in 1998.

The indie comedy, Tomorrow Night, features Steve Carell, J.B. Smoove, Robert Smigel, and was created with support from CK’s comedian friends, including: Jon Stewart, Chris Rock, and Denis Leary. As a treat for fans, he’s now decided to release the film on his website for just $5.00.

Check out the trailer for the movie below, as well as a clip of him discussing it with Jay Leno.

The fourth season of Louie returns to FX this May. 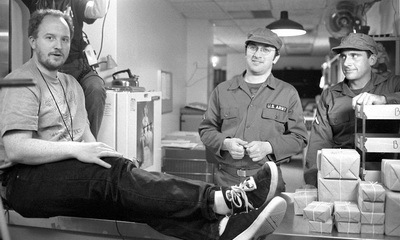 Synopsis:
Comedian and TV writer Louis C.K. wrote, produced, and directed this comedy about New York photo shop owner Charles (Chuck Sklar), labeled a “mean bastard” by his mailman (J.B. Smoove). After a date with nympho Lola Vagina (Heather Morgan) goes nowhere, Charles meets elderly Florence (Martha Greenhouse). Married to a gambler (Joe Dolphin), Flo hasn’t heard from her son (Greg Hahn) for two decades. After her husband is killed by a pack of wild dogs, Charles and Flo marry — but then her son returns and she also decides to adopt a gun-wielding teen named Clean (Bruce Brown). It’s all too much for Charles, who decides to head back to his photo shop. Gagwriter Louis C.K. has scripted for David Letterman, Conan O’Brien (seen here in a cameo), Dana Carvey, and Chris Rock. Filmed in black-and-white with Super-16 blown up to 35mm. Shown at the 1998 Sundance Film Festival. ~ Bhob Stewart