Lynda Carter, who played Wonder Woman for three seasons recently spoke to the Baltimore Sun about Adrianne Palicki being cast as Wonder Woman in the new reboot. 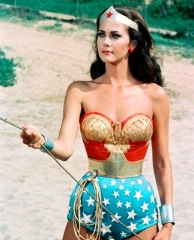 Lynda Carter, who played Wonder Woman for three seasons in the late 70s recently spoke to the Baltimore Sun about Adrianne Palicki being cast as Wonder Woman in the new reboot.

Palicki would only be the second actress to ever portray the DC comic heroine since Carter, who won the Miss World USA pageant and was a semifinalist for the 1972 Miss World title before she landed the iconic role.

“I think it is an amazing role to play,” Carter tells the Baltimore Sun.

“I know Adrianne Palicki is going to be really nervous about it, just because you would be. But I have a lot of confidence in David Kelley and what he’s going to come up with. He’s so talented, and that’s really where it needs to be, is in the writing.”

“I spoke with David yesterday, and he’s really, really excited about it.”

“I think the story needs to be retold. It needs to have a fresh look at it. It affected a lot of people. I think it’s time, I think it’s important to have it out there again.”

When asked if she has any advice for Palicki, Carter modestly said:

“When young people recognize me, I’m always floored, absolutely floored. But it’s been going on a long time.”

“I think it’s just a reflection of how people felt about the character, much more than how they felt about me in particular. The character’s so beloved, for a lot of reasons.”