‘Mad Men’ Returning For A Fourth Season, But The End Is Coming?

AMC just announced that their critically acclaimed show “Mad Men” will return for a fourth season on Sunday, July 25.

AMC just announced that their critically acclaimed show “Mad Men” will return for a fourth season on Sunday, July 25.

But all like all good things they must come to an end. “Mad Men” creator Matt Weiner announced at the the National Association of Broadcasters (NAB) convention in Las Vegas that he does not expect to continue the show past its sixth season, even if the series continue to be renewed.

In response to Weiner’s comments, an AMC spokesperson said, “No one wants to see Don Draper wearing a leisure suit. We trust Matthew’s vision and that he knows where to take the show. But with that said, ‘M*A*S*H’ figured how to stretch the Korean War for more than a decade, so stay tuned.”

“Mad Men” is currently one of the best running series on any network to date and while I hate to lose a favorite, I can’t help but respect Weiner’s decision to end the show before it completely jumps the shark and through several rings of fire. *cough*The Office*cough*

Of course, three years is still a long ways to go. A lot could happen to change Weiner’s mind and the folks working at Sterling Cooper.

And here’s our gratuitous shots of Christina Hendricks as Joan Holloway. 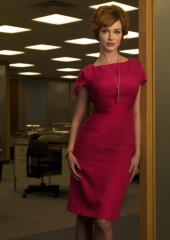