“X-Men” anime is set one year after the death of Jean Grey and after the X-Men organization has effectively disbanded. 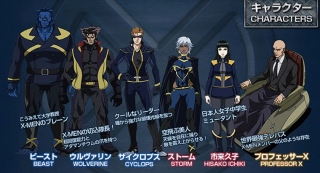 Last month we showed you the trailer for Madhouse’s anime adaption of Marvel Comics’ X-Men. Today, the Japanese television channel Animax has unveiled the character designs from Madhouse’s adaptation of as well as the list for the cast.

The new “X-Men” anime will feature practically an all new voice cast that’s entirely different from the casts that dubbed the 1992-1997 American animated series and the live-action film franchise. But it’s interesting to point out that Koyama who provided the voice over for the title character in Madhouse’s ongoing “Wolverine” anime series, and Hino had previously dubbed the character Jean Grey into Japanese for the live-action films will reprise their role.

“X-Men” anime is set one year after the death of Jean Grey and after the X-Men organization has effectively disbanded. However, Hisako Ichiki (a mutant created by Joss Whedon and John Cassaday in Astonishing X-Men) — a mutant middle school girl living in northeastern Japan — has gone missing. An emergency call for help reunites the X-Men where they travel to Japan and encounter a supremacist cult called the U-Men.

“X-Men” premieres April 1 in Japan on Animax. Fans can expect an English version later this year on the G4 network along with Wolverine and Iron Man.