Mads Mikkelson’s and One Other ROGUE ONE Character Revealed

Did an autographed poster just reveal Mad Mikkelson’s character as well as the return of a Clone Wars Era Jedi?

Now that we’ve all recovered from Force Friday, we’ve got some new about Rogue One, the first Star Wars Anthology film. We know a lot about the cast at this point. We know that we’ll be seeing Felicity Jones, Mads Mikkelsen, Ben Mendelsohn, Forest Whitaker, and Alan Tudyk. What we don’t know is any of the characters’ names. Now some of that appears to have changed.

The cast of the film all autographed a poster with both their names and character names. We can’t see most of it, but we can see that the name under Mikkelsen is Galen. Now, we don’t expect this to be Galen Marek from The Force Unleashed, but a new character. 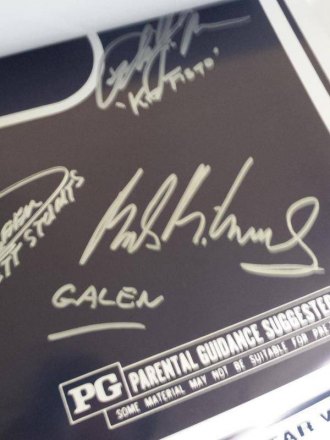 Interestingly, if you look in the upper portion of the photo, there’s another autograph that you can’t really make out, but underneath, it says: “Kit Fisto”!

Last we saw Kit Fisto, he was getting sliced in the belly by Darth Sidius. Does this mean that he’s alive? More likely, we are looking at a potential flashback or something like that.

Here’s a video that shows the scene where it happened: