Major Spoilers For THE AMAZING SPIDER-MAN 2

You have been warned already, but on the off chance that you just learned to read between the time you saw this headline and the time that you clicked on it, we are giving you one last chance to bail. If you want to read the spoilers, scroll down.

First, they were able to confirm that Colm Feore is playing Adrian Toomes aka The Vulture!

Second – They have also learned (but not confirmed) that his appearance will be part of a four-way super villain team-up that includes Vulture, Rhino, Electro, and Green Goblin… If that sounds familiar to you, that is because…

Third – The team-up of the four villains is the starting play in having the Sinister Six as the bad guys in the third film!!!

Fourth – Chris Cooper was spotted on set as Goblin (head in place;)! battling Spider-Man, and we’re told they’ll likely be duking it out in the movie’s climax, no doubt leading to the death of Miss Gwen Stacy (Emma Stone). 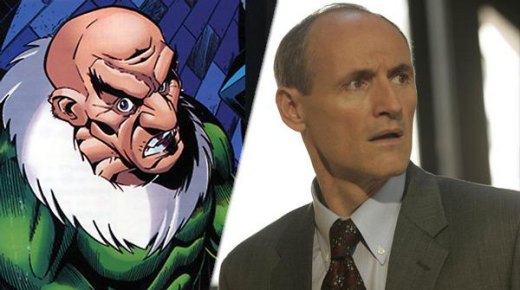 Official Synopsis:
In The Amazing Spider-Man 2, for Peter Parker (Andrew Garfield), life is busy – between taking out the bad guys as Spider-Man and spending time with the person he loves, Gwen (Emma Stone), high school graduation can’t come quickly enough. Peter hasn’t forgotten about the promise he made to Gwen’s father to protect her by staying away – but that’s a promise he just can’t keep. Things will change for Peter when a new villain, Electro (Jamie Foxx), emerges, an old friend, Harry Osborn (Dane DeHaan), returns, and Peter uncovers new clues about his past.