It’s been a while since a comic book sold 1,000,000 copies and Marvel Comics Editor in chief, CB Cebulski thinks that Marvel Comics #1,000 is the book to do it. In fact, he initially teased the upcoming project a few weeks back on Twitter with the very idea of releasing a new million-selling book. Today, The House of Ideas unveiled the new project to the New York Times and it sounds like an interesting, if not overly-complicated concept.

According to the report, the book aims to tell a story that will cover one year per page between 1939 and 2019. To make matter even more complicated, each page will have a different team of writers and artists. The book will not only focus on Marvel’s tier one players like Captain America, Iron Man, and Spider-Man but will also feature lesser-known heroes like Night Thrasher and The Three X’s. 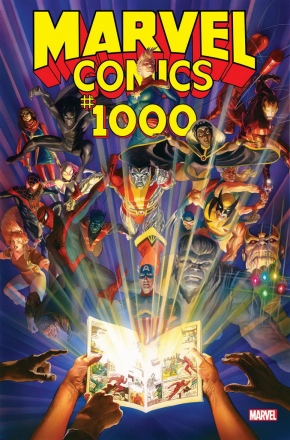 Tom Brevoort, Marvel’s executive editor and senior vice president of publishing, had this to say:
“This is by far the most complex and complicated and difficult book I’ve ever had to assemble. Our characters are mentioned in so many different ways and in so many different mediums and we always keep track. Now, these distinguished individuals are able to contribute back to the comics they grew up on.”

Along with Industry veterans like Kurt Busiek, Gail Simone, Alex Ross, Tim Sale, Mark Waid, Erik Larson, and Al Ewing (who also helped conceive the idea), the book is set to feature some interesting new talent like Phil Lord and Christopher Miller and the rapper Taboo of the Black Eyed Peas.

I want to be more excited about this book than I am. I love a lot of the creators involved in it, but the idea of telling a story where the creative voice changes every page sounds like it will give me narrative motion-sickness. I hope that I’m wrong, but we’ll know one way or another when Marvel #1000 hits comics shops on August 31, 2029.