Marvel just released this new image of Chris Evens as Captain America from the new movie “Captain America: The First Avenger.” This gives us yet another look at Evens in costume and it appears as if he had just gone through battle and stands victorious but disheartened in a battlefield. 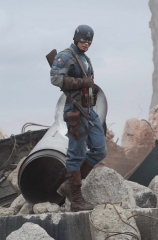