From the looks of the image they released it won’t just be all women, but all of the women Marvel has ever created.

It was recently announced that Marvel would be collapsing all of their universes into one shortly through their upcoming “Secret Wars” event. Now, Marvel has announced that one aspect of this will be the creation of their first, all woman super hero team, A-Force. From the looks of the image they released it won’t just be all women, but all of the women Marvel has ever created. Some of the women set to be on the roster include: She-Hulk (as the team’s leader), Dazzler, Medusa, Nico Minoru, Jean Grey, Vampira, Elektra, and a new “cosmically powered” hero named Singularity.

The book will be written by G. Willow Wilson (Ms. Marvel) and Marguerite Bennett (Angela), Jorge Molina will be taking on the artistic duties.

Here’s what Wilson had to say about the new title: “We’ve purposefully assembled a team composed of very different characters — from disparate parts of the Marvel U, with very different power sets, identities and ideologies. They’ll all have to come together to answer some big questions: What would you sacrifice to succeed? What is being a hero worth?” 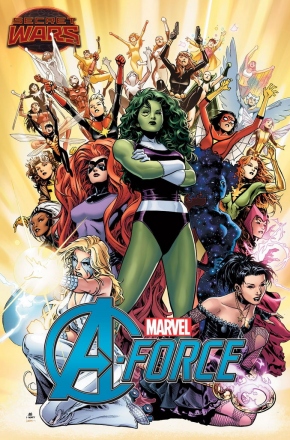