“with a power vacuum atop the Empire, those Moffs will jockey for position and control, and the heroes of the Rebel Alliance will soon discover that a wounded and fractious Empire may be more dangerous…”

In September, Disney, Lucas, and Marvel will be releasing the much hyped “Journey to Star Wars: The Force Awakens”. A major part of that will be Star Wars: Shattered Empire, a new series that takes place in the aftermath of Return of the Jedi. Today, the synopsis has been released and it sounds like it’s going to be something you’ll want added to your pull list immediately. 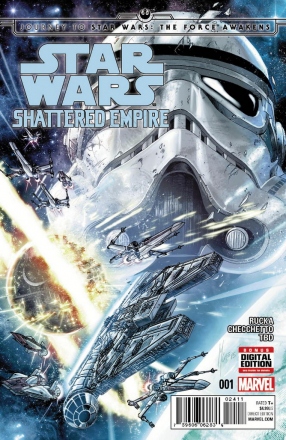 In December, a new chapter in the Star Wars saga will begin when Star Wars: The Force Awakens — the seventh Star Wars film and the first to take place after Return of the Jedi — arrives in theaters. As the excitement for the new film builds, Lucasfilm and its partners will explore the aftermath of Return of the Jedi in a series of canonical projects debuting in September, and Marvel Comics leads the way with Greg Rucka and Marco Checchetto’s Star Wars: Journey to The Force Awakens: Shattered Empire #1!
Emperor Palpatine’s twenty-year reign of terror came to an abrupt and fiery end in the skies above the forest moon of Endor. A decisive victory for the Rebel Alliance, to be sure, but even with the loss of its leadership, the Empire’s Moffs and regional governors retained their hold on important systems from the Core to the Outer Rim, thanks to the might of the Imperial Starfleet. Now, with a power vacuum atop the Empire, those Moffs will jockey for position and control, and the heroes of the Rebel Alliance will soon discover that a wounded and fractious Empire may be more dangerous than any threat they faced before!

Greg Rucka, the acclaimed writer of Wolverine and Cyclops, reteams with his collaborator on The Punisher, Marco Checchetto, for a Star Wars tale that will reveal the untold story of the aftermath of the Battle of Endor and the political machinations that ensued. The Rebellion’s desperate struggle to liberate the galaxy from the Empire’s tyranny will face new challenges, and Rucka and Checchetto will bring their incisive storytelling to a story that no Star Wars fan will want to miss.