Matt Smith To Be The Good Doctor At Least Through 2013

Matt Smith is to remain on as the Doctor at least through 2013, which would incidentally also be “Doctor Who’s” fiftieth anniversary.

According to Kasterborous, Matt Smith is to remain on as the Doctor at least through 2013, which would incidentally also be “Doctor Who’s” fiftieth anniversary. Although it’s speculated that Smith is currently trying to negotiate a higher salary and a new contract for the series.

A quote from a “shadowy insider” had this to say:
“The current team believe that Matt is the person to continue taking the show forward over the next few years and want to avoid the prospect of fans having to get used to yet another actor in the role in the near future.”

Personally, I have no issues with this. I’ve been enjoying Smith’s spin of the character and would like to see his version develop and grow over time. If there’s anything I hate more, it’s a revolving door of actors due to contract disputes and whatnot. “Doctor Who” is set to return for a Christmas special that will air in the UK on Christmas Day followed by a full season a little later in 2011. Below is a promotional image for the special that was released recently: 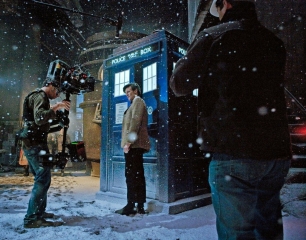