Monty Python To Reunite for Sci-Fi Comedy ‘Absolutely Anything’

After years of hoping, fans of Monty Python can rejoice, a new movie is on its way! 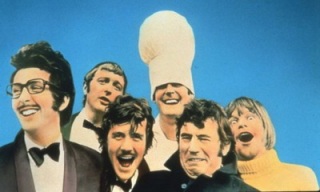 After years of hoping, fans of Monty Python can rejoice, a new movie is on its way! Just to make things even more geektacular, the movie they are teaming up for will be a sci-fi comedy! The news comes to us from Variety, via Collider and it looks like the movie will a cgi/live action feature.

The Pythons are set to voice key roles “as a group of aliens who endow an earthling with the power to do ‘absolutely anything’ to see what a mess he’ll make of things.” Life of Brian director Terry Jones co-wrote the script with Gavin Scott and will helm the comedy.”

There is a very strong chance that Michael Palin, John Cleese, Terry Jones, Terry Gilliam, and Eric Idle will all at least lend voices to CGI characters int he film if not more. Also, Robin Williams is in talks for a role as a Frenchman.

This film is over 20 years in making, but we still aren’t sure when it will happen because no production date has been set as of this report.