Along with Spider-Man, it appears that The Green Goblin’s other arch-nemesis is dental hygiene.

When Sam Raimi turned The Green Goblin into a Power Rangers villain, it broke the heart of a lot of fans. Now, Marc Webb is putting his stamp on the character through Dan DeHann, and he’s given him a much darker and realistic look. There’s been a bunch of pics released of DeHaan as the Goblin, but this new one gives us the best look at him to date.

Along with Spider-Man, it appears that The Green Goblin’s other arch-nemesis is dental hygiene. 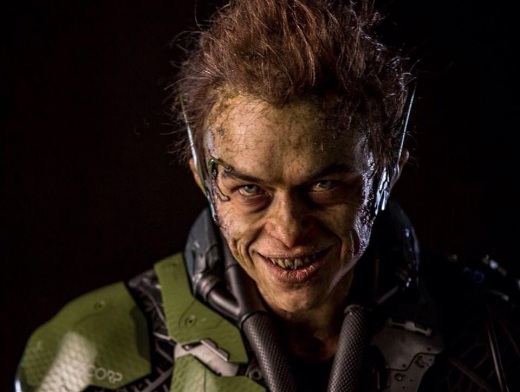 Official Synopsis:
It’s great to be Spider-Man (Andrew Garfield). For Peter Parker, there’s no feeling quite like swinging between skyscrapers, embracing being the hero, and spending time with Gwen (Emma Stone). But being Spider-Man comes at a price: only Spider-Man can protect his fellow New Yorkers from the formidable villains that threaten the city. With the emergence of Electro (Jamie Foxx), Peter must confront a foe far more powerful than he. And as his old friend, Harry Osborn (Dane DeHaan), returns, Peter comes to realize that all of his enemies have one thing in common: Oscorp.