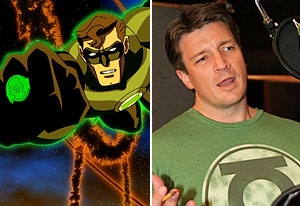 Nathan Fillion finally gets his.

Fillion will at last have the opportunity to play Hal Jordan in Warner Bros. Animation’s upcoming Green Lantern animated movie. While we won’t get to see our favorite Captain Tight Pants wear emerald green in a live-action superhero film, we will get to hear his acting chops in “Green Lantern: Emerald Knights,” due June 7th.

According to TV guide, the movie is “a series of vignettes about the Green Lantern Corps, an intergalactic police force. Fillion plays Hal Jordan, the Green Lantern of Earth’s space sector, who mentors Arisia, a new recruit played by Mad Men’s Elisabeth Moss.”

Fillion, the ultimate fanboy, had this to say in a statement:

“I was always reading the comic books, I was always a spectator. Now I feel like I own a little piece of Green Lantern.”