Last night, Cobie Smulders appeared on Letterman to promote both How I met Your Mother and a small independent film that she’s been working on lately called, ‘The Avengers’.

Last night, Cobie Smulders appeared on Letterman to promote both How I met Your Mother and a small independent film that she’s been working on lately called, ‘The Avengers’. During her appearance, she dropped a new clip from the film that features her character (Maria Hill) and Nick Fury (Sam Jackson) having a bit of a verbal tussle.

Also, there’s mention of a little cube that we’ve all been watching for years in comics and that has also appeared in another Marvel film under a new name (that constantly reminds me of “A Wrinkle In Time”). 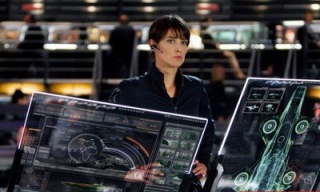