New Banner Released for THE HOBBIT: THE DESOLATION OF SMAUG

Check out the banner today and then come back tomorrow for the new trailer!

Warner Bros has announced that we’ll be getting a new trailer for The Hobbit: The Desolation of Smaug tomorrow. However, to prep us for the excitement, they’ve released a great new banner which features the Drawves and Bilbo battling their way through the webs of the Mirkwood Spiders.

The Hobbit: The Desolation of Smaug opens on December 13th.

Check out the banner below and then come back tomorrow for the new trailer! 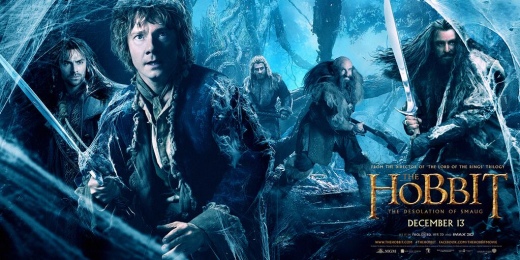 Official Synopsis:
The second in a trilogy of films adapting the enduringly popular masterpiece The Hobbit, by J.R.R. Tolkien, The Hobbit: The Desolation of Smaug continues the adventure of the title character Bilbo Baggins (Martin Freeman) as he journeys with the Wizard Gandalf (Ian McKellen) and thirteen Dwarves, led by Thorin Oakenshield (Richard Armitage) on an epic quest to reclaim the lost Dwarf Kingdom of Erebor.