BBC has announced that the DVD set of season six will include a bonus feature featuring a five episode miniseries called “Night and the Doctor.” 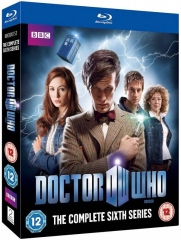 BBC has officially announced that the boxed DVD set of season six of the current “Doctor Who” will include a bonus feature featuring a five episode miniseries called “Night and the Doctor.”

The installment was written by Steven Moffat and made specifically for the DVD/Blu-ray release.

It’s unsure how long each miniseries will be. But according to Bleeding Cool, they are guesstimating that these shorts will range anywhere from ten to fifteen minutes long stringing a story together between them. If we had to guess, they’d be about five minutes or similar to most sequential web shorts.

Regardless of length, it’s brand new material and it ought to tide us over until the Easter special.

Anyway, here’s the full press release for what will be on the discs when they launch in the UK on November 21st:

The Doctor, Amy and Rory return to face monsters, mysteries and adventures all across time and space in the action-packed sixth series. Billed as the biggest and best series yet, all 13 thrilling episodes of Series 6 together with host of exclusive extras arrive on DVD and Blu ray from 21st November, priced £51.05 and £61.27. Episodes are also available on download to own.

Complete with the series opener when together they find themselves in Sixties America, battling the invasion the world forgot, then journey on the high seas of 1696 aboard a pirate ship, to solve the mystery of the Siren. In a bubble universe at the very edge of reality, the Doctor meets an old friend with a new face, and in a monastery on a remote island in the near future, an industrial accident takes on a terrible human shape. They also venture across centuries and galaxies, where they encounter the greatest war criminal in all of history – and Hitler. They’ll also discover there’s no scarier place in the universe than a child’s bedroom and a visit to an alien quarantine facility will reveal to Rory a very different side to his wife. In a hotel where walls move, corridors twist and rooms vanish, death lies waiting. But the Doctor’s time has yet to come. He has one last stop to make on his final journey – an old friend needs his help and an old foe must be defeated. But time catches up with us all and the Doctor can delay no more.

Doctor Who Complete Series 6 is also available in a Limited Edition numbered Boxset that features a Silence head in terrifying 3D as well as four lenticular art cards!