With “Smallville” set to return on April 15th, new promo images for their upcoming episode entitled “Booster” have been released. 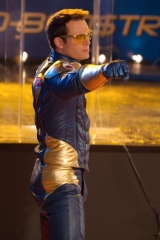 With “Smallville” set to return on April 15th, new promo images for their upcoming episode entitled “Booster” have been released. These new images gives us a better look at two new characters who’ll make their first appearance on the show — Booster Gold (Eric Martsolf) and Blue Beetle (Jaren Grandt Barlett).

Here’s the official episode synopsis:
Lois suggests to Clark that his daytime persona should become less noticeable so that people don’t suspect he’s The Blur after everything that happened with the VRA. So Clark starts adopting the look of Clark Kent, newspaper reporter. At the same time, Booster Gold (played by Eric Martsolf) arrives from the future. Booster is a fame-hungry superhero, who’s interested in posing for reporters after saving people’s lives. He even tries to convince Lois to write an article about him. But Lois is loyal to Clark and The Blur and tries to counter Booster’s PR campaign with one for The Blur.

Jaden Brandt will also be guest starring as Jamie Reyes/The Blue Bettle, after an alien weapon resembling a scarab beatle falls from a truck during one of Booster’s saves and latches on to Jamie. Unlike Booster and The Blur, however, Jamie is not able to control his powers or his new suit and starts attacking citizens around Metropolis.

Well there ya go, a new “Smallville” episode that’ll feature a NASCAR driver and a guy in fat foam costume! Just kidding.