We’ve seen a few photos from the set of Judge Dredd that feature Karl Urban as Dredd. Now we are getting our first look at Game of Thrones star Lena Headey in her role as Ma-Ma Madrigal.

The LA Times interviewed her about the film and her role and here’s what she had to say:

“She’s a prostitute who then kills her pimp and takes over his drug-running business,” says Headey of her role. “And Ma-Ma is a bit of a man-hater.

“I think of her like an old great white shark who is just waiting for someone bigger and stronger to show up and kill her,” continues the “Game of Thrones” star. “She’s ready for it. In fact, she can’t wait for it to happen. And yet no one can get the job done. She’s an addict, so she’s dead in that way, but that last knock just hasn’t come. This big, fat, scarred shark moving through the sea and everyone flees and she’s like, ‘Will someone just have the balls to do it? Please?‘”

Judge Dredd is set to hit theaters later this year… and we are very excited. 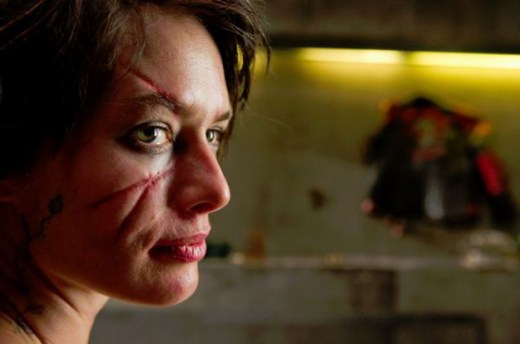