It’s like the never ending parade of “Kick-Ass” movie posters. Here’s a new international poster for Matthew Vaughn’s “Kick-Ass” which features Chloe Moretz as Mindy Macready as Hit-Girl. The 11 year-old superhero assassin who is trained by her father Big Daddy (Nicolas Cage). It’s actually a snazzy poster and probably one of my favorites.

Aside from the new poster, “Kick-Ass” will also come out a week earlier than previously announced. You can now expect “Kick-Ass” to drop on March 26. Kick-ass! Bad pun entirely intended. 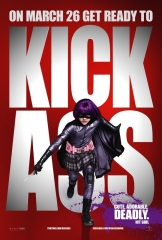