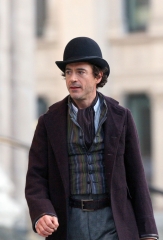 He’s going from being one of the most high-tech heroes to the most classic Detective. Robert Downey Jr’s follow up to the wildly successful summer blockbuster, Iron Man, is going to be the Guy Ritchie directed, Sherlock Holmes film.

When he was asked what he could possibly bring to a role that’s been done by so many great actors, he joked: “Clearly I’m going to do it better than it’s ever been done. The more I read about it the more overwhelmed I was by the weight of it and the amount of people who will be watching to see if it’s gotten right.”