Spielberg and Lucas are featured as two rednecks in the woods who demand Indy “squeal like a pig” as the pair humiliates and degrades him. 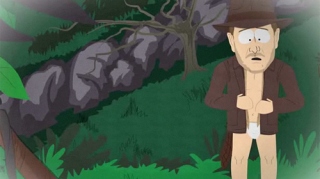 Controversy has broken out over last week’s episode of South Park. The show, which has always been known for pushing the line, ventured someplace new.

The episode featured multiple rapings of Indiana Jones by George Lucas and Steven Spielberg. If you saw “Indiana Jones and the Kingdom of the Crystal Skull,” then you probably already understand where the idea came from. While the movie was a box office hit, many fans felt like the story went into places that Indiana Jones should never go. For example… the refrigerator scene…

“We all saw it happen,” says the handicapped Jimmy, discussing “The Crystal Skull” as if it’s a personal tragedy. “Do you remember that scene with Indiana in the refrigerator? It didn’t make any sense, Stan.”

From there, an excited Stan sits down to watch the latest film in a dream sequence/nightmare, but soon has to warn Indiana Jones that Spielberg and Lucas are nearby. And then in a series of film parodies, Indy’s pants come off.

Spielberg and Lucas are featured as two rednecks in the woods who demand Indy “squeal like a pig” as the pair humiliates and degrades him. It also shows them re-enacting the rape scene from the Jodie Foster film, The Accused. Even a Stormtrooper becomes a victim, prompting the “South Park” police to lock up the directors to prevent such travesties from happening again.

In their defense, Matt Stone a Trey Parker warned Spielberg and Lucas not to make a fourth Indy film back in 2002.

So was it over the line? What are your thoughts?

Here’s one more thing just to ponder before you comment… The studios were so pleased with how well Indiana Jones 4 did at the Box Office, that 5 could be coming sooner than you might think.