We’ve still got a year to go before the Hellboy reboot starring David Harbour as Big Red and Milla Jovovich as the Blood Queen hits theaters, but Milla took to Instagram today to show off a new banner for the film that sets the tone deeply in the artwork of Hellboy creator Mike Mignola. Don’t be surprised if we get our first look at footage from the film at this summer’s San Diego Comic-Con. 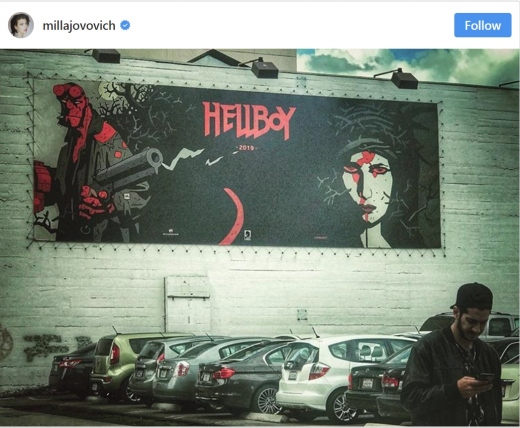 Here’s what David Harbour had to say about his take on the main character:

“There are things that I’m gonna do that are different. Hellboy is the same character from the comics and from what Ron did, there are certain things that are the same thing, but I do think that—I don’t know, there’s a different approach because I sort of highlight different things, I think, than Ron does. Ron sort of embraces this machismo in himself and in Hellboy, and I really like it and it’s super fun and it’s a super fun performance, but I think Hellboy has a certain psycho dynamic where occasionally he has to prove that he’s the lion, has to roar, and I think he struggles with his own masculinity. But I don’t think he needs that as much as maybe those other movies. I have a bit of a different take on his capability or his slickness. I sort of think that for me he’s a little less skilled at constructing that persona.”