Even if you aren’t going to Comic Con, yo will have a chance to check out some great preview footage from Season 3 of The Walking Dead during the weekend long marathon that will be airing this Saturday and Sunday on AMC. On SUnday night they will be airing a new episode of The Talking Dead, starring Chris Hardwick, where they will interview the cast and show us around the new sets for next season. In the meantime, AMC has released a promo poster today for the Comic Con Related events involving The Walking Dead. 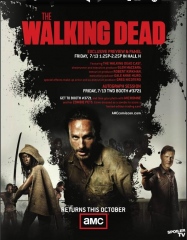