Another promo image of Jason Momoa as Conan has surfaced and it’s not looking good. No, it’s looking down right awful.

Another promo image of Jason Momoa as Conan has surfaced and it’s not looking good. No, it’s looking down right awful. What makes it worse is that this is an official promo shot of “Conan.” It’s just not inspiring or getting me excited for this movie at all. This is metaphorically similar to seeing what you think is a really hot girl from behind before she turns around, and then when she does your penis shrivels up and falls off.

The new “Conan” movie is said to be based on Robert E. Howard’s “Conan the Barbarian story.” Jason Momoa will play a young Conan who sets out across the continent of Hyboria on a quest to avenge the murder of his father and the slaughter of his village. This new remake is expected to be more faithful to the original comic material than any of the Arnold Schwarzenegger Conans were.

The film also stars Stephen Lang, Ron Perlman, Leo Howard and Rachel Nichols and has a 2011 release date. Can we say straight to DVD? 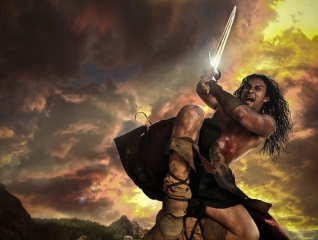