Chris Mintz-Plasse plays Red Mist, who plays an integral role in the film… what that role is, we can’t say… what we can say is that this movie will kick major ass.

“Kick-Ass” is an adaptation of Mark Millar and John Romita Jr’s ultra-violent modern tale of a young nerdy comic book reading teen (Dave Lisewski) who decides to become a costumed vigilante despite not having any powers. He is soon joined by other and more violent vigilantes, Big Daddy (Nicolas Cage) and his assassin 11-year-old sword-wielding daughter, Hit Girl, who is played by Chloe Moretz.

Chris Mintz-Plasse (McLuvin) plays Red Mist, who plays an integral role in the film… what that role is, we can’t say (If you really want to know just pick up the comics which are all available now at your local comic book store!). 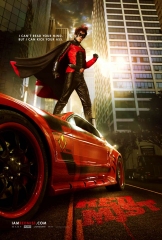