Here are some new set photos from Marc Webb’s “Spider-Man” that gives us our first look of Andrew Garfield in costume as Spider-Man swinging through the streets!

On Location Vacations have uploaded some new set photos from Marc Webb’s “Spider-Man” reboot that gives us our first look of Andrew Garfield as Spider-Man swinging through the city streets in an attempt to foil a robbery.

Here’s what OLV had to say:

During last night’s shoot both Andrew Garfield (who plays Spider-Man) and a stuntman were on location taking turns filming a scene in which Spidey swings over the “New York City” traffic. In the photo above Andrew is climbing the ladder to for a shot on top of the truck while the stuntman can be seen standing next to him in the black jacket. 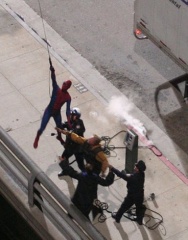