It was starting to feel like the world would never actually see the Knights of Badassdom.

It was starting to feel like the world would never actually see the Knights of Badassdom. Sadly, while we may never see it the way it was intended, we will at least be seeing something in theaters on January 21st and on VOD February 11th.

If you’ve been following the trails of the film, you may know it’s basic story by now, a group of LARPERS are sucked into a real fantasy adventure when they accidentally summon a demon. The movie has been promoted at Comiccon for at least the last two years with Director Joe Lynch. However, the movie’s production company took the film away from him in post production and recut the movie to a paultry 70 minutes. That is the version that is going to get released. If we are lucky, it will do good enough that perhaps a special edition will see the light and we’ll see the movie the way it was intended.

KNIGHTS OF BADASSDOM follows three best friends (Peter Dinklage, Steve Zahn and Ryan Kwanten) and dedicated LARPers (Live Action Role Players) as they take to the woods to reenact a dungeons and dragons-like scenario fresh out of the mythical Middle Ages. Trouble arises after they unwittingly conjure up some serious evil in the form of a blood-lusting Succubus, from the pits of hell.
Fantasy and reality collide on the Fields of Evermore in an all-out epic battle of make-believe wizards, demons and assorted mythical creatures. Their courage and friendship is put to the test as they attempt to vanquish the evil they have summoned. Will the group prove to simply be foam sword-wielding LARPers, or true “Knights of Badassdom?” 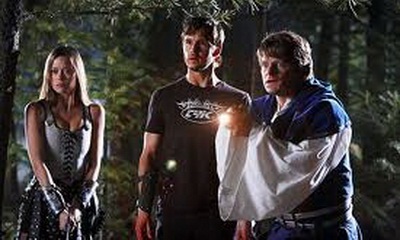