Kermit and Piggy’s answer to the question about Fox News serve as proof that a frog and a pig have more common sense than the #1 News Network in the USA. 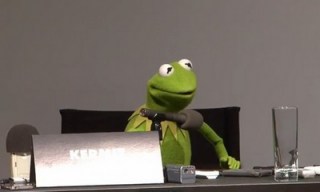 When “The Muppets” was released in the US a couple of month ago, there was an uproar from Fox News that they perceived the tone of the film to be “Anti Big Oil”. If you have had the pleasure of seeing the film then you know that this is complete and utter horse crap. Perhaps the crew at FOX News might have known this too… had they checked their facts.

Now, the film is getting ready for release in the UK and that means a whole lot of new press to help promote it. A couple of days ago, Kermit and Piggy did a press conference with the British Media and the Fox News Kerfuffle was something that the reporters couldn’t wait to address. What followed was proof that a frog and a pig have more common sense than the #1 News Network in the USA.

Kermit and Piggy also gave their thoughts on The UK phone phone hacking scandal, Dave Grohl, and their recent campaign to host the Oscars. They even manage to talk a bit of smack about Shrek!