Based on an original idea by Verbinski, Rango stars Johnny Depp as an Hawaiian-shirt-wearing chameleon with an identity crisis who goes on an adventure to discover his true self. The movie co-stars Isla Fisher, Abigail Breslin, Alfred Molina, Bill Nighy, Harry Dean Stanton, Ray Winstone, and Timothy Olyphant. 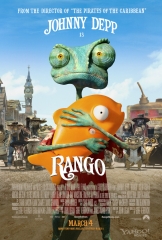