“Quorra is my new Leeloo.” Find out why in our “Tron: Legacy” movie review. 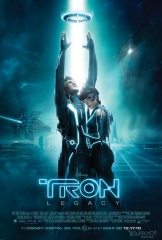 A couple hours ago, I had the pleasure of seeing Disney’s “Tron Legacy.” The first thing I’d like to do is thank the company 42 Entertainment for arranging the event. The screening, one of several around the country, was the finale to the nearly two year long viral ARG (Alternate Reality Game) that has become a near obsession with fans .

With the level of hype that Tron Legacy had received in recent months, I actually went in with greatly diminished expectations. After all, Everyone in the world was screaming from the roof tops that ‘Avatar’ was the best movie ever, but it was really just the drunken love child of Ferngully and Pocahontas. That said, when the end credits rolled, I was satisfied that Legacy was one of the first movies that I can remember that truly lived up to the hype.

Don’t get me wrong, the movie isn’t perfect, but it is pretty damned good. The first thing to consider is the story. There has be a lot of concern among moviegoers that, as a sequel to a movie that came out over 20 years ago, most people just won’t get it if they haven’t seen and loved the original.

– Quick Side Bar – The original Tron film is the kind of movie that most people either love or hate.

It was a 100% pure geek film before it was cool to be a geek. It was one of the first films to use CGI and is considered by those who love it to be almost a digital Wizard of Oz.

You do not need to be a Tron Super Fan to enjoy Tron Legacy, In fact, you don’t need to have ever heard of the first film at all.

OK, back to review. Any back story that might be confusing from the first film is pretty much cleared up in the first five minutes of the movie via a bed time story from Kevin Flynn to his son Sam. From there on out, you are treated to something new and unique that really warrants multiple viewings to wrap your head around.

I’m treading lightly as to not spoil the film for anyone, something that people seem to always do in movie reviews. The characters in the film were nearly all spectacular. If I had to pick out a weak point in the film, it might be Michael Sheen. I’m a big fan of his, and his performance is good, but it was just a little too “Ziggy Stardust” for the vibe of this movie. Conversely, Garret Hedlund was much better than I’d expected. Other reviewers have commented that he gives off a young Steve McQueen vibe in his role and I completely agree.

The roles that impressed me most were Olivia Wilde as Quorra and Jeff Bridges as Kevin Flynn, Clu and Kevin Flynn. First, Olivia Wilde… She was just great. her character is so much more than it is portrayed in the trailers and she plays the hell out of the role. From her more innocent moments to her hard core, ass kicking scenes, she is always on point, never over the top and one of the reasons I’m anxiously awaiting the third movie in the series. Quorra is my new Leeloo.

Bridges had a daunting task in the film. Not only did he have to play himself at two different ages, but he also plays the film’s Antagonist, Clu. As Flynn, Bridges has been held prisoner on the grid since 1989, a digital eternity. He’s gone from being the brash young man of the original Tron movie to an almost zen like master in Legacy. In the midst of the relatively dark tone of the film, there were clearly echos of “The Dude” in his portrayal. This made for a good tension breaker in the film and definitely elicited more than a couple laughs from the audience throughout the film. Conversely, he plays Clu as a man possessed. He is a man in search of perfection in the form of perfect order. It was great.

To say that Daft Punk created a brilliant score for the film would be to short change their achievement. Their music drove the story and set the tone just as much as the actors or the director of the film. From the more orchestral tracks through the techno beats, there was not a weak moment in the soundtrack. I would be shocked if they don’t receive an oscar nomination for best original score.

Director, Joe Kosinski is a mad scientist. His direction on this movie is just ridiculously awesome. You would not know that this is his first feature film. He crafted a visual world and story that you could almost literally fall into. He took a story that could have been bogged down in technicality and made it flow smoothly. His experience in architecture and design are probably what made him the perfect man for this job. A few more films like this and he will be known as the American Luc Besson.

Beyond that, what can I say without giving away too much of the plot? The action was great. there are some pretty stellar fights ranging from hand to hand, to disc wars, light cycles and even mind blowing aerial battles.

Now, here is the big deal for me… 3D. I freakin hate 3D. I don’t want to hate it, but it has always sucked so badly in the past. Tron Legacy is the first film that I have loved in 3D. I don’t think I could imagine seeing the film any other way. this isn’t some gimmicky 3D where things are flying at your face and jumping out of the screen. It is a whole new beast that truly enhances the movie going experience and makes IMAX actually worth the ticket price. This version of 3D is more about depth of field. Instead of an image jumping out at you, there is more of a feeling that you are standing on the edge of a world and you could fall into it at any second. 3D creates a scope for the landscape and action that has never really been achieved on film before. It was almost so good that for a second I forgot how badly Avatar sucked.