If Go Hero’s 1:6 Scale Buck Rogers figure was a pizza it would be topped with lobster and gold leaf and hand fed to you by scantily clad women. 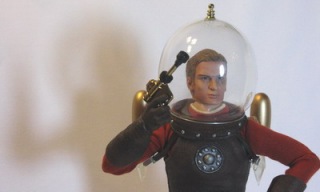 Holy Crap. I have been reviewing toys for the better part of five years now and I’ve been collecting them since I was a kid, but I’ve never seen a figure like this. If Go Hero’s 1:6 Scale Buck Rogers figure was a pizza it would be topped with lobster and gold leaf and hand fed to you by scantily clad women.

I would call this figure ridiculous, but that would sound like an insult. There really has never been a figure like this. Sure, Sideshow has put out some nice figures and companies like Hot Toys and Medicom do some truly amazing work, but the over the top, gluttonous amount of goodness that comes along with this figure is… well, ridiculous.

First, let’s look at the list of what comes along with the figure and then we’ll talk about how it all works together. 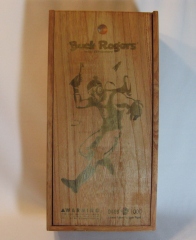 Let’s start from the inside out. The ATOmedia body. What is it? well, it is an unassuming 1:6 scale body at first. Sure, the sculpting is great and the 28 points of articulation all work fine… but there’s a nugget of awesome inside it that you’ve never seen before. Inside the body is a media player… that’s right, a one gig media player. But wait, there’s more, seriously. Not only can you update the player through the usb port in the torso, but you can control the whole thing through the remote control. It worked beautifully. Sound was clear, volume control worked great. I also really loved that instead of just a few catch phrases, I was treated to a full radio episode of the classic adventures of Buck Rogers. It already has me excited about when Flash Gordon comes out. There’s no way I can avoid the temptation to fill that figure with Queen’s film soundtrack!

Next, let’s talk about the outfit. This was a super high quality job. I have seen lots of toy companies skimp on the costume, but not Go Hero. The cloth pants and shirt had great stitching and were snug, but still movable enough to change the figure’s position. The rest of the outfit was made of a combination of, some sort of rubber (trust me, it works great as a leather substitute) and die cast metal. The vest looks awesome. They could have easily used plastic, but they went all out. The gun holster fit perfectly onto the belt and the latch on it worked great. Speaking of the belt. I was expecting it to be a pain in the ass to get on and off, but it was simple to manipulate and when you put his clothing back together, he didn’t look like he’s just been thrown down a hill.

One of the things that truly impressed me on the outfit were the gloves. While some companies make you wrestle with gloves and force them over the hands of figures, Buck’s hands are built into the glove. Just pop off the normal hands and pop on the glove hands. This was also a lot easier than I expected. It was really easy to position him in almost any way and to pop limbs on and off without a major production.

The gun… This was such a nice touch. The gun is also die cast and done beautifully.

That brings us to not one, but two helmets. The first helmet is made of that same rubbery material, but it also has a metal visor that goes in two position. Honestly, it was not the easiest thing to change the position, but that is a pretty minor issue. That first helmet looked great and fit perfectly on his head, but it was the other helmet… that came in its own box, that really blew my mind.

His big space bubble helmet is glass! Who does that?

Who makes a glass helmet for an action figure? No one! Well, just one company that I know of, and thank God they do, this thing is flippin sweet.

From the costume to the accessories, and even down to the media player body, Go Hero put out a major amount of effort here. They even went full retro on the packaging and made the box out of Maple wood. If I had one complaint about Buck Rogers it would be that it doesn’t come with a stand. He actually stands pretty well on his own, but I’d like to be able to pose him in mid-flight or something like that. That said, this figure is probably the nicest 1:6 scale figure I’ve seen. Sure, there are some more modern looking figures that have great likenesses like Hot Toys Iron Man or Joker, but for all around coolness and the fact that as soon as you lay your hands on the wooden box, you’ know you’ve got something special in your hands… there is nothing like Buck Rogers.