New Video and Pics: Explosions and Alien Space Ships On ‘The Avengers’ Set

Joss Whedon brings the boom! Plus, a first look at a piece of an alien ship (possibly Skrull?) from the set of Marvel’s ‘The Avengers’ in Cleavland.

Footage and pics from ‘The Avengers’ is starting to pour in almost more feverishly than the clips we’ve been seeing from the set of ‘ The Dark Knight Rises’. We’ve already had some cool explosions and fun fight scenes with Chris Evans as Captain America. Now we’ve got two new big things for you.

First, we’ve got our very first real look at what is possibly an alien ship. It hasn’t been confirmed yet, but everyone is guessing that The Skrulls will feature pretty heavily into the movie, especially after seeing the weapons on the bad guys that Captain America was fighting yesterday. Anyways, it isn’t completely built yet, but here’s part of that alien ship: 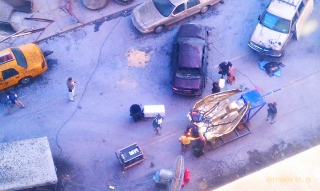 AS cool as seeing a pic of something that might be a space ship is, it is a lot more fun to watch Joss Whedon blow stuff up. Rumors are circulating that Chris Hemsworth and Scarlett Johansson have been on set today rehearsing some sort of battle scenes. The explosion could be tied to that.. and hopefully some really cool footage later today.