Logan isn’t the only big thing coming out next March. Nintendo is set to come out with their new console and they just finally gave us the reveal trailer about 20 minutes ago. My personal thoughts? This thing is going to give me arthritis. I haven’t played on controllers that small since my old hand-held Donkey Kong game in the 80’s.

Check out the trailer and then we’ll go over what we know:

1. The system is called the Nintendo Switch.
2. There has not been a price point announced for the system.
3. The base for the system is the “Nintendo Switch Dock.” It connects to the TV, but then you can pop the Switch out of it and move instantaneously into portable mode.
3. The tiny little thingies they expect you to use as the portable switch controllers are called “Joy-Con” controllers. It’s good, because I don’t think I’d know I was supposed to feel joy if they weren’t telling me in the name.
4. The “Joy-Con” controllers can be used as nunchucks or they can be used for 2 player action.
5. They can also be attached to the Switch screen to use as a more traditional, grip style control accessory.
6. As if they knew people would not be happy with the “Joy-Con” controllers, Nintendo is already announcing that they’ll be offering an upgraded, “Pro Controller.”
7. In what might be the coolest feature in the system, multiple Switch systems can be brought together for the equivalent of LAN play.
8. Games we know will be available, at some point, for the system include: Skyrim, NBA 2K, Mario, Mario Kart, Zelda Breath of the Wild, and Splatoon. 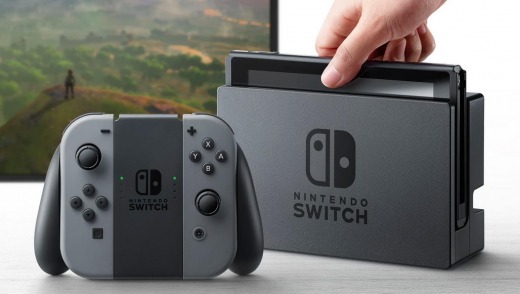